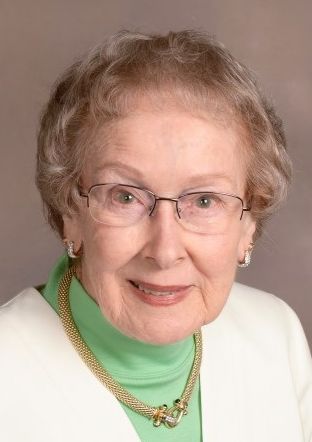 Candy Kuschner, director of the Glen Carlyn DBC in Arlington VA said: “Carlene was the sweetest, kindest, most impeccably dressed player. She always brought cookies to the games." Garrigus had previously gifted more than $80,000 to the ACBL Educational Foundation.

Katherine Carlene Garrigus passed away on January 6, 2018 at The Johnson Center. Carlene Garrigus was born in Pottsville, Pennsylvania on June 26, 1925. She grew up in Tucson, Arizona. She attended the University of Arizona where she met her future husband, Norman F. Garrigus. The war had just ended and Norm was returning to civilian life after spending four years in the Air Corps during World War II. They were married in December 1947. Carlene graduated in 1948 and Norm in 1950 in Electrical Engineering. After a brief time with RCA, Norm applied for recall in the Air Force, his true love. This was two months before Korea. His thirty years in the Air Force was in the field of Electronic Countermeasures. After retirement, he worked for Northrup Grumman for twenty-five years, also in ECM. Norm passed away on August 14, 2012 at The Johnson Center.

Carlene was a Medical Technologist and spent fourteen years at a Military Hospital-twelve years at Malcolm Grow Medical Clinic at Andrews Air Force Base in the microbiology lab. After retirement she broke her hiatus with her favorite pastime and returned to playing Duplicate Bridge. She attained Silver Life Master status before she felt it was time to quit.

Carlene had a large extended family: one brother, four cousins, three nieces, one nephew, and a sister-in-law. All were members of the Carlene Fan Club. She will be greatly missed by all.