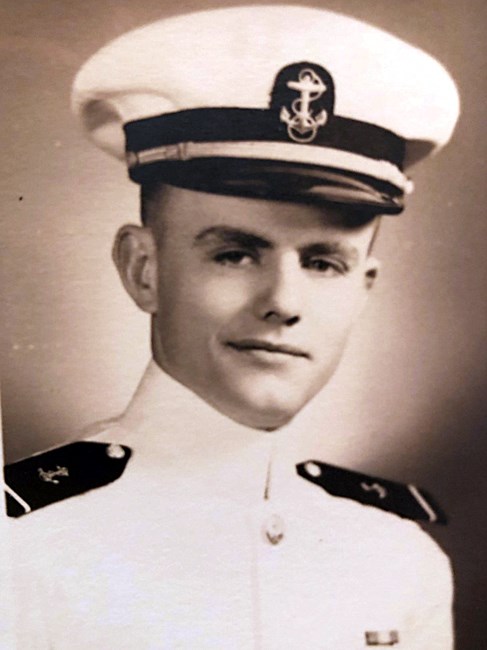 Captain Edwin Barden "Ted" Smedberg, USN (Ret) died quietly in his sleep with his wife and a few of his children at his side at Walter Reed National Medical Center on 7 August, 2021. Born in Annapolis, MD on 13 July, 1934, he was the son of Vice Admiral and Mrs. William R. Smedberg, III. He graduated from the U.S. Naval Academy on 4 June 1958.

Soon after graduation, on 7 June 1958, Ted married Beverly Hogle, the daughter of Vice Admiral and Mrs. Reynold D. Hogle, He then entered flight training and received his "Wings of Gold" as a Naval Aviator on 25 January 1960 in Corpus Christi, TX.

Upon receiving his wings, Ted served in various Ant-Submarine (VS) squadrons. Those tours were interspersed with shore duty at the Naval Academy, Office of the Chief of Naval Operations, and the Bureau of Naval Personnel. His first command was the Navy Recruiting District in Dallas. This was followed by Command of VS-29, the first Pacific Fleet Squadron to deploy the S-3A Viking. Following a tour as Deputy Commander of the Navy Recruiting Command, Ted was selected for major shore command and served as Commander, Navy Recruiting Area Seven, headquartered in Dallas. After two years in Dallas, he was assigned as Commanding Officer of the Naval Air Facility Atsugi, Japan.

His final tour of duty was with the Office of Naval Research in Washington, DC. Ted logged 4,300 hours in Naval aircraft and amassed 420 carrier landings, 260 of which were night operational landings. In addition to various campaign and unit awards his personal awards include the Legion of Merit, five Meritorious Service medals and one strike flight Air Medal.

Upon retiring from active duty in 1987, he committed his second career to the Roman Catholic Faith through 30+ years of service at St. John Academy in McLean, VA as an administrator as well as a tutor in Math and Science. He particularly enjoyed mentoring struggling students. He also was a strong supporter of youth sports, particularly baseball where he served as a little league umpire for many years. An avid golfer, he was instrumental in organizing annual outings to Hilton Head with his Naval Academy classmates for over 20 years.

He is survived by Beverly, his wife of 63 years, five children, 14 grandchildren and eight great-grand children with two more on the way.

A Mass of Christian Burial was held at St. John the Beloved in McLean on 13 August, 2021. He will be interred in Arlington National Cemetery

In lieu of flowers, donations may be made in Ted’s name to Shriners Hospitals for Children, St. Jude Children’s Research Hospital, or Divine Mercy Care.