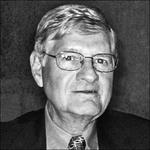 Neal L. Cooper passed away peacefully on July 10, 2020, at his home in Gainesville, VA with his family by his side.

While Neal's longevity could be attributed to "good genes", it is very likely that his kind nature, healthy lifestyle and easygoing ways had more to do with his living until the age of 93. Neal was unflappable and navigated the ups and downs of life with humility, grace and humor.

Neal was born in Chattanooga, TN. He served in both WWII in Germany and later served in the Korean War. He graduated from the University of Tennessee in Chattanooga and went on to earn a MBA from Columbia University in New York. He worked for Mettler Corp., for over 30 years. When he retired he became a real estate agent and investor.

Neal was an avid golfer, gardener and bridge player.